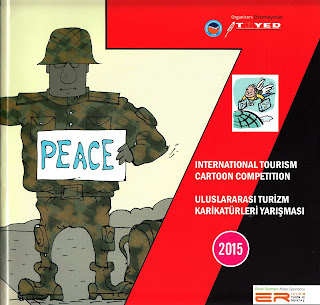 Time to review the recent catalog (received a couple of months ago I must confess) of the International Tourism Cartoon Competition organised in Turkey by Anatolia: A Journal of Tourism Research of Anadolu University and the Association of Tourism Writers & Journalists. This 7th edition had the theme of "Tourism and Peace" which brought in a lot of cartoons with doves, olive branches, and the peace signs while some works had migration as the sub-theme which is of course the most important problem the humanity is faced nowadays because of the ongoing wars and regional conflicts. Forced or voluntary migration is the negative form of changing places in stark contrast with tourism. So what will tourism look like in the future if all these wars last for a long time? Will people change worlds if not places on planet earth? That is the new theme this year of the International Tourism Cartoon Competition 2016 and will bring more hope and joy in the cartoons I suppose: Future of Tourism. 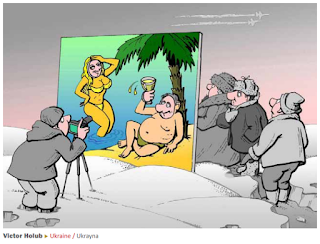 The International Tourism Cartoon Competition catalog is sent to all cartoonists whose works are included in the book. The 145 works in the book are the finalist cartoons selected by the pre-evaluation committee from the 895 works sent in by 445 cartoonists representing 67 countries. The objective way the cartoons are selected, nominated and qualified for awards is a bit complicated process but it works with the help of internet and some volunteer work.
And this catalog published in paper is also within reach of internet users on the website of the competition. There you can also find in 7 languages the guidelines for submission by internet or snail mail, the youth and adult categories, and the awards of course, the all-inclusive holidays of 5 days in a 5-star hotel in Turkey for 2 persons: http://tourismcartoon.com.
Also on facebook. 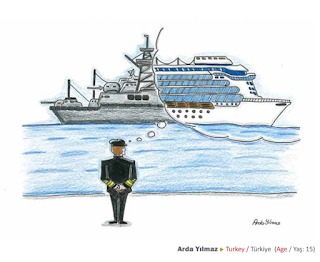