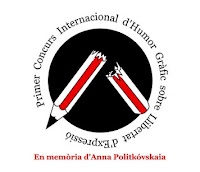 FIRST INTERNATIONAL
CARTOON COMPETITION
ON THE FREEDOM OF EXPRESSION.
IN MEMORY OF ANNA POLITKOVSKAYA.
ANNOUNCED BY:
Organizers: Llibreria Papasseit and Associació l’Oliva (Programme for Human Rights)
Collaborators: PEN Català and Instituto Quevedo del Humor
Mass media partners: LaMarea and La Directa
PARTICIPATION:
Who can participate: Professional or amateur artists and illustrators over the age of 18 years old.
Theme: Graphical Freedom of Expression in Memory of Anna Politkovskaya
How to Participate: Digital or postal submission of artists’ own, original pieces of work
Funding: €700 distributed in 3 Prizes: 1st place: €400; 2nd place: €200; 3rd place: €100.
Deadline for entry: 31st August 2016
Postal adress and e-mail of job submission: Gran Via Carles III, 53, 5è – 3a. 08028 – Barcelona. / convocatorias@iqh.es
PRESENTATION OF THE COMPETITION:
The “First International Cartoon Competition on the Freedom of Expression in Memory of Anna Politkovskaya” is a joint initiative between the Associació l’Oliva and the Llibreria Papasseit de Manresa bookshop, with the support of PEN Català and Instituto Quevedo del Humor (IQh), and the support of the magazines Revista LaMarea and La Directa.
The Associació l’Oliva is a charitable organization which works developing educational, awareness investigation and cultural projects across four large areas: peace, human rights, democracy and sustainable human development.
All six organizations have come together to run this competition, in memory of Anna Politkovskaya, on the tenth anniversary of her murder. With this competition we want to pay homage to those people who have defended freedom of expression and the freedom of the press in spite of attempts to silence them and make them invisible. The competition aims to be a tribute to journalists, writers, illustrators, bloggers, painters and other artists who have suffered persecution, too much, to the point of giving everything for unacceptable and unforgettable acts of flagrant injustice which continue to take place.
The defence of civil and political rights, and work so that their guarantee is a reality, necessitates and requires initiatives which bring these matters closer to citizens: raising questions; promoting reflection; generating debate and discussion; exercising rights.
RULES OF PARTICIPATION:
1. This competition is open to participation from any artist in the world over 18 years of age, whether professional or amateur.
2. The theme of the competition is the freedom of expression and the press.
3. Participants can enter a maximum of three of their own, original pieces of work to the competition. These works cannot have previously won a competition.
4. There is no restriction on the format in which works are presented. The work can be created using any painting technique.
5. The work can be without words or in Catalan, Spanish, English or French. If another language is employed, the work will have to be accompanied by a translation to one of the indicated approved languages.
6. Entries must be sent by email to the address convocatorias@iqh.es or to the postal address:
Gran Via Carles III, 53, 5è – 3a.
08028 – Barcelona.
7. For those works presented online, they must be in .jpg format and a resolution of at least 300ppi.
8. The deadline for submissions is midnight (in Barcelona) on 31st August 2016.
9. The submission of work must be accompanied by a sheet containing the name, surname/s, postal and electronic addresses, contact telephone number and a photograph (or caricature) of the work’s author, as well as a brief explanation of their journey as an artist (maximum 8 lines).
The photograph or caricature, as well as their biography, may be used in the production of materials for education and increasing awareness of human rights once the competition has ended and may, therefore, be published unless a wish to the contrary is expressly stated.
10. Three prizes will be awarded.
• First prize of €400
• Second prize of €200
• Third prize of €100
11. The judges’ decision is final.
12. The judging committee is formed of:
• Salem Zenia. Journalist and persecuted amazigh author, refugee in Catalunya.
• Míriam Iscla. Catalan actress, T de Teatre co-founder. Currently she’s representing the monologue «Dona No Reeducable», inspired by Anna Politkòvskaia (by Stefano Massini directed by Lluís Pascual).
• Anna Roca. Designer and Art Historian, cultural promoter and Llibreria Papasseit cofounder.
• Somebody from the IQh.
• Carme Arenas. PEN Català’s president.
• Arcadi Oliveres. Economist, activist and member of various social movements in Catalonia that are fighting for peace and social justice.
• Mass media observers: La Marea, La Directa
13. Winners will be notified of the judges’ decision by email during September 2016 and it will later be published on the competition blog and social media.
14. The top 80 selected entries will form a touring exhibition and be used to create educational and/or informative and/or awareness materials as the organizers’ associations consider appropriate. The use of material in this way will always be accompanied by the name of the author, unless a wish to the contrary is expressed.
15. The electronic version of all entries can be visited in the virtual gallery which will be produced after the virtual competition spaces (https://humorgraficllibertatexpressio.wordpress.com) and social networks (on Facebook: Anna Politkovskaia in Memoriam and on Twitter: @InMemoriamAnna) and, if applicable, those of Llibreria Papasseit and Associació l’Oliva or their collaborators.
16. The institutions organizing and collaborating in the competition will be able to distribute and reproduce the competition entries without express permission of the author and without that presenting any obligation on the part of the author. The educational and awareness materials which can be created from the submitted work will be the intellectual copyright of CopyLeft. Any profits gained from these materials will be wholly reinvested into the continuation of the project.
17. The organizing institutions will resolve any query which may arise and is not covered in these rules.
18. Participation in the competition implies full acceptance of these rules.
Rules + Entry Form in PDF .
Weblog: https://humorgraficolibertadexpression.wordpress.com/
Source: certameneshumorgrafico .