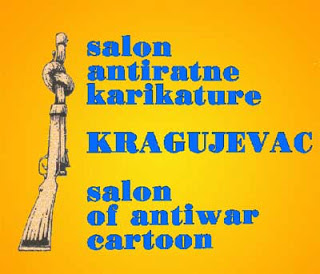 Salon antiratne karikature KRAGUJEVAC 2013 Salon of antiwar cartoon, Serbia
In memory of the severe crime that happened in Kragujevac in 1941, 72 years ago, when the German occupying forces executed several hundreds of innocent civilians in just one day, also sincerely wishing something like that never and nowhere to happen again, and that peace may prevail in the world
The City of Kragujevac a n n o u n c e s
THE 17th INTERNATIONAL SALON OF ANTIWAR CARTOON CONTEST «KRAGUJEVAC 2013»
The International jury will make a selection out of submitted cartoons which is to be exhibited and published in the Salon’s catalog. Besides, the following prices are to be awarded:
The Grand Prix «The Peace Messanger» prize and 1.500 euros is to be awarded by the International Association of Peace Messanger Cities
The Gold Plague prize and 1.000 euros
The Silver Plague prize and 800 euros
The Bronze Plague prize and 500 euros
The Mayor of Bydgoszcz (Poland) Award, amounts 750 euros
The City of Ingolstadt (Germany) Award, amounts 500 euros
The City of Bielsko-Biala (Poland) Award, amounts 500 euros
The City of Suresnes (France) Award, amounts 500 euros
The City of Pitesti (Romania) Award, amounts 500 euros
The City of Carrara (Italy) Award, amounts 500 euros
THE PRIZE FUND IS 7.050 EUROS IN TOTAL.
The Jury might additionally award several diplomas to close contenders.
Cartoonists and fine artists from all over the world have the right to participate. They should submit at most three (3) original cartoons, which have not been awarded by any other international competition, on the subjects of antiwar as well as solidarity between people and nations. Digital prints will be accepted only if they are signed by the artist. The artworks should be utmost A4-A3 formated, while art technique is at the artist’s choice. On the back of the artwork there should be written data on the artist (such as: name, surname, address, phone/fax, e-mail).
The submission deadline is September 13, 2013.
The jury session is to be held on September 13-14, 2013.
The cartoons are to be sent to the following address:
SALON ANTIRATNE KARIKATURE
Trg Slobode 3
34000 Kragujevac
Serbia
Submitted artworks are not to be returned, and the Salon keeps the right to use them without any restitution.
NOTE:
So far the 16th International Antiwar Cartoon Salon «Kragujevac 2011» had great international promotion and afirmation. On the occasion of the award ceremony the prizes were handed over and the exhibition was opened in Kragujevac.
Afterwards, the 16th Salon exhibition was launched in Pitesti, Romania, on the of Day of the Romanian Statehood. Later, it was part of the International festival «The World is Colourfull» held in Ingostadt, Germany, and then it was presented in the European Commission headquaters Charlemagne building to over 500 begginning civil-service employees from more than 58 countries.
Upon the International Day of Peace on September 21, the show was on in Plonsk, previously it was in Wielun, and this Polish tour ended in Oswiecim (Auschwitz).
The selected works of the 16th Salon also were on display in New Haven, USA, which is the presiding of the International Association of the Peace Messanger Cities (IAPMC), the association that is the main patron of the Salon awarding the Grand Prix «The Pease Messanger». When back from the USA, the exhibition is going to be shown in Belgrade, Serbia.
The Salon's exhibition has been invited to be the side programe at the IAPMC General Assembly session in Messolonghi, Greece, this October.
The 17th Salon's exhibition is going to be open in Oswiecim (Auschwitz), Poland, on the occasion of the International Holocaust Remmembrance Day in January 2014.
Director
of the Salon of antiwar cartoon
Miodrag Stojilovic
Tel.\fax: +381 34 336 123
E-mail: mstojilovic47@gmail.com
www.antiwar.kragujevac.rs
Source: http://cartooncenter.net/.