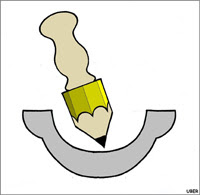 “PALATIFINI CARTOONS” Contest
IV Genoa Pesto World Championship
RULES
Contest
Palatifini Cultural Association launches the humorous contest "Palatifini CARTOONS", connected to the event of the “IV Genoa Pesto World Championship”, which will be held Saturday, March 17, 2012 in Genoa.
The cartoons competition is divided into two distinct sections:
• SECTION “PALATIFINI” - in which the works must be freely inspired, in general, to food and eating food in the world;
• SECTION “SPECIFIC CATEGORY” - which this year will be dedicated to "Genoese Pesto".
The competition will give rise to a prize for each section, an exhibition and a catalog, according to the terms specified below.
Participants
The cartoons competition is addressed to cartoonists all around the world, both professionals and amateurs.
Organizing Committee and Jury
The Organizing Committee consists of permanent members of Palatifini Cultural Association and is open to the participation of other persons appointed by cultural associations, by supporters and sponsors. The Jury will select two winners, one for each section of the contest.
"Palatifini 2012" and "Pesto Genovese" Awards
Two are the prizes of the contest, with a value of EUR 750.00 each:
• One for the "Palatifini" section and
• the other for the "Pesto Genovese" section.
The Jury will select the winners. The Jury will see the participation of well-known professionals in the world of arts and graphic-humor in particular. The composition of the jury as that of the Organizing Committee will be announced before the final ceremony on the official website of the event.
Other prizes or special prizes or special reports could be done at the discretion of the Jury.
The authors of the winning works will be hosted in Genoa at the expense of the organization to attend the awards ceremony which will be held during the “gala dinner” or the final phase of the Genoa Pesto World Championship, at the Palazzo Ducale in Genoa on March 17, 2012.
The authors of the winning works will be notified by e-mail and published on the official website of the event.
Cartoons Exhibition
It will be organized an exhibition of the best cartoons received, in the days around March 17, 2012, unless changes due to technical reasons. Selected works will be exhibited in different locations and published through the official website of the event.
Only suitable works, valued and selected by the Organizing Committee, will be admitted to the exhibition.
It is not excluded the possibility that the exhibition could be used to present the Fifth Genoa Pesto World Championship in 2014 as well as the new edition of "Palatifini Cartoons".
Cartoons Catalog
It is planned, unless changes due to technical reasons, the publication of a catalog of the cartoons received.
Only suitable works, valued and selected by the Organizing Committee, will be published. The catalog will be distributed free of charge. However, sponsorship will be possible to cover publishing costs as well as the sales of catalogs for charitable purposes.
One copy of the catalog will be sent for free to authors of the works selected.

HOW TO PARTICIPATE
Works must be sent as follows.
• Format: digital works in jpg format. Maximum 300 dpi A4 (horizontal or vertical)
• Name: file’s name should be structured as follows: "Palatifini or pesto (depending on which section you wish to attend)" _ "name or alias author" _ "work title".Jpg
• Quantity: only one work for each section is accepted by the same author.
• Sending: files must be sent by e-mail, together with the application form duly signed, at
cartoons@pestochampionship.it (application form can be downloaded at www.pestochampionship.it ).
• Period: works can be submitted from October 15, 2011 to January 31, 2012.
• Unique works: works should not have been awarded in previous competitions and should not be previously published on paper or web.
• Collective quote: authors' names will be posted on the official website of the event periodically updated until the deadline.
• Single quote: authors’ names of the selected works will be published on web site after 31 January 2012.
• Original copy: the original copy of the winning works ("Palatifini Award" and "Pesto Genovese Prize") will be printed and signed by hand by the author and will remain property of Palatifini Cultural Association.
• Use of the works: the organization reserves the right to use all the works selected for exhibitions and for advertising new editions of the event, without paying any fees to authors.
Official site of the event www.pestochampionship.it
For more information info@pestochampionship.it