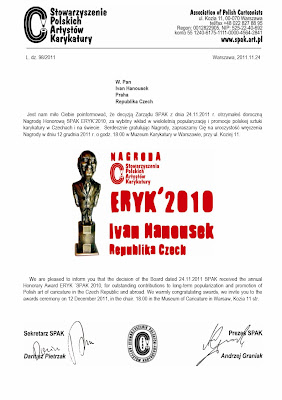 Ivan Hanousek, the editor of e-GAG weekly of the Czech Cartoonists’ Union, member of presidium and secretary of the Biennale Pisek, jury member of many national and international cartoon competitions, and author of several books of course as a journalist, has been awarded the annual Honorary Eryk Lipiński Award 2010 by SPAK for outstanding contributions to long-term popularization and promotion of Polish art of caricature in the Czech Republic and abroad. Hanousek is the first foreign bearer of the title!
Hanousek (right) was presented with his award statuette of Eryk Lipiński (1908-1991), the founder of Caricature Museum in Warsaw, and the special posters of the occasion in the Museum by Witold Mysyrowicz (left), the new president of the Association of Polish Cartoonists, on 12 December 2011, the opening day of exhibition of the Polish national competition on the theme "Stop Forest Pollution!"
(Source: GAG 11-52) 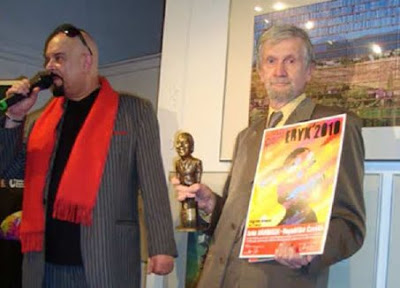