Catalog of Balkan Exhibition in Greece on "Football" 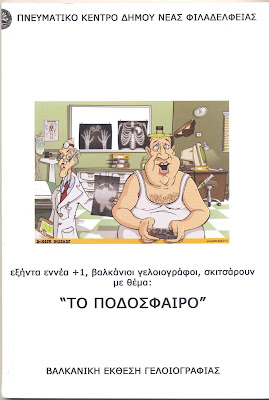 Today received the catalog of the first Balkan Cartoon Exhibition organised by the Cultural Center of Nea Philadelphia in Greece on the occasion of the "2010 FIFA WORLD CUP SOUTH AFRICA". The exhibit was on between 10-18 June 2010.
"World Cup 2010, South Africa, football, fiesta, spectacle, agony, hope, anticipation, a popular sport, the million-earning football stars, nationalism, racism, hooliganism, the great interests, the commercialization, the multinational companies, the role of the referees, the first World Cup for the poorest Continent, the TV, a man's world, the universality of the game, a return to childhood, a woman's discomfort to a man's obsession, the monetary crisis...multiple thoughts, in parallel ways...
On the other hand, caricature. The art of cartooning, the mediated criticism, the sight into our everyday life and its malfunctions, satire and self sarcasm, all given through the artistic view of the people of a unique area, such as the Balkan Peninsula, that has always loved, and still does, both football and humor", writes Mr Stavros Kontos, the Mayor of Nea Philadelphia, in his introduction to the catalog.
The catalog of size 16x23 cm contains color and b/w cartoons of 70 artists from the following Balkan countries: Bulgaria, Greece, Republic of Macedonia, Romania, Serbia, Slovenia, Turkey. Most of the cartoonists have contributed with more than one cartoons and they are all included in this catalog of 96 pages.
Many thanks to the organisers for publishing and sending to the participants this humorous book in a year of financial crisis.
Participants from Turkey:
Burhanettin Ardagil, Muhammet Bakır, Erdoğan Başol, Nuri Bilgin, Kenan Böğürcü, Ferhat Demirbaş, Halis Dokgöz, Faruk İnan, Ayten Köse, Önder Önerbay, Kemal Özyurt, Serdar Sayar, Nevzat Varhan, Kamil Yavuz, Mustafa Yıldız. 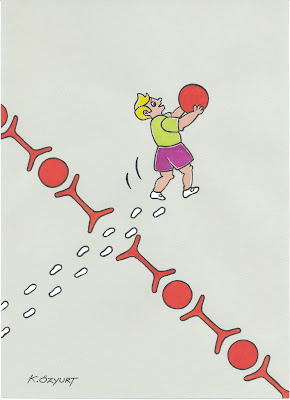