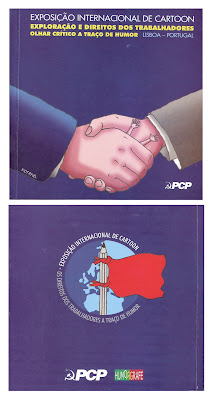 Having not been to the post office for two weeks, I found in the box today the catalog of the "Critical Look Through a Humoristic Line" exhibition organised by PCP in Lisbon, Portugal, in March 2010. It was sent on April 6 and possibly arrived a week ago.
112 artists from 37 countries sent in 360 cartoons for the exhibition with the theme "Exploitation and workers’ rights" and 227 entries are included in the catalog of size 15.1x15 cm with some color pages of total 240. It is published in Lisbon in March 2010. From Turkey the contributing artists are: Bayramoglu, Askin Ayrancioglu, Emre Yilmaz, Erdogan Basol, Hicabi Demirci, and Kemal Ozyurt.
"The critical point of view, the creativity, the artistry and sense of humor that we found in the many hundreds of works submitted reveal an ideal of our time and the universality of the struggle of the working class and all workers against exploitation and injustice, and for more rights and better wages," writes Jeronimo de Sousa, General-Secretary of PCP, in his introductory words to the catalog.
They have also sent a copy of the invitation brochure of the exhibition which was open between March 18 - April 9. Many thanks to the organisers for they do what they promise and without delay. 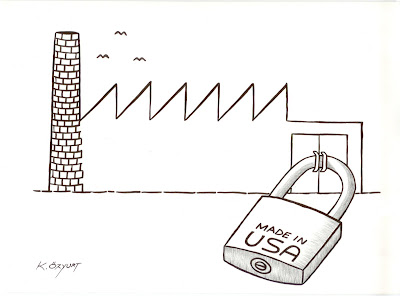