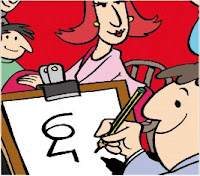 RULES OF 2nd INTERNATIONAL CARICATURE CONTEST FESTIVAL “HUMOREIX” LLEIDA (ASSOCIACIÓ DE COMERCIANTS DE L’EIX AND HUMORÀLIA)
1. Any artist, amateur or professional, can participate in this competition, as it is a competition which is open internationally.
2. The competition theme is: "Caricature Celebrities Cinema Actors."
3. Only one original piece of work will be accepted from each participant. The piece must be original, not have won any prizes in previous competitions or have been published anywhere else. Any pieces which are considered, according to the criteria of the judges, to be similar in any way to other well known artwork will be disqualified immediately.
4. Artwork can be executed using any pictorial technique within a maximum scale of A3 (420 x 297 mm) or a scale which is proportional to this. Digitally formatted work will also be accepted. In this case the work must have a resolution of 300 ppi and be presented in JPG or JPGE format.
5. If any text is present in the work it must be translated into Spanish or Catalan.
6. Artwork must be presented within a sealed envelope together with the details of the participant (name, surname, address, nationality, telephone number, email address, etc). Work can also be sent by email to the following address: eix@eixcomerciallleida.com (Eix Comercial), with the participant’s details in another document attached to the same email. It is advisable for artwork that is not digital to be colour photocopied and hand signed. All original artwork will be returned to the artist once the competition has finished.
7. The final admissions date for artwork is 4th May 2009.
8. From 12th May 2009 artwork will be exhibited in the shops that are members of the Association of the Lleida Eix Comercial (Shopping District), and will be duly labelled. Prior to this a panel of specialist judges will be convened, formed by one representative of Humoralia, another from the Shopping District and two professionals who will judge the 200 best entrees, which will be exhibited. These artworks will also be exhibited on the Eix Comercial (Shopping District) Association website. The judges reserve the right to declare the prize null and void if the quality of the originals is insufficient or if there is little or no public interest.
9. The artist is obliged to give up all image copyrights for the artwork presented for its publication and exhibition, both physical and digital, as well as publishing them in a catalog, which can be downloaded from the web humoreix. Once the work has been judged and finalized it will be returned to the artist. The organization pledges not to use images of the winning piece, or any other award winning pieces, without prior permission from the artist. Moreover, the organization will take full responsibility for the originals from the moment they are received until the finalization of the competition.The organization promises to inform the contestants of the reception and acceptance of the participating artwork via email or publication on the Eix website.
10. One prize only of €1,500 will be awarded to the winning entry.
11. The verdict will be decided by public vote over the Internet using the Shopping District’s website in a first phase. Only allowed one vote per person. In a second phase, a qualified Jury composed by representatives persons of the Commercial Association “Eix” and Humoràlia will decide between the 3 most popular votes, wich was the winner. The judges’ decision will not be open to appeal.
12. The verdict will be released during the 5th and 6th June 2009.
13. Participation in the competition means the acceptance of all terms and conditions. Any doubts or problems that may arise during this time will be dealt with by the organization through a memo to its members.
Source: regulamentoscartoon