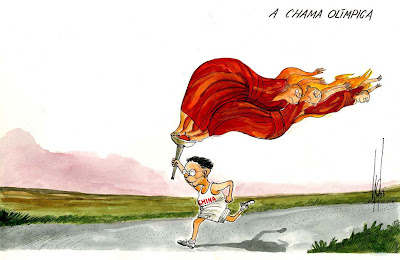 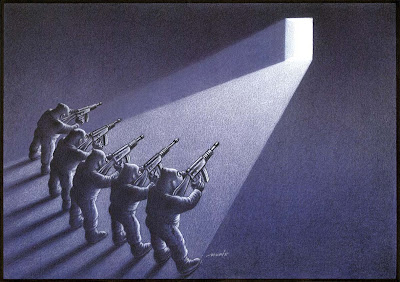 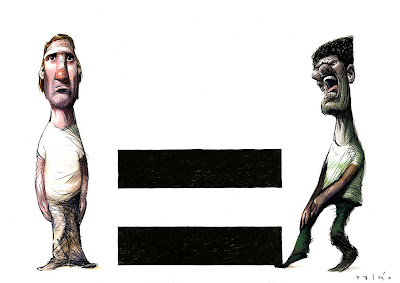 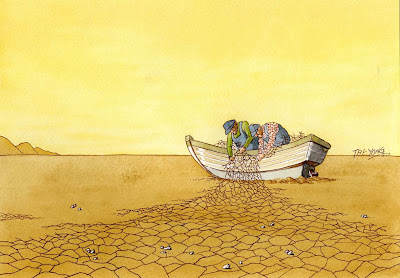 Taeyong Kang
Augusto Cid wins X PortoCartoon
The well-known Portuguese cartoonist Augusto Cid was the winner of the 10th PortoCartoon World Festival, organized by the Portuguese Printing Press Museum, and with the Official Sponsorship of Caixa Geral de Depósitos.
The second prize was to Muhittin Koroglu, from Turkey and the third prize was awarded to two cartoonists ex aequo: Dalcio Machado, from Brazil and Taeyong Kang, from South Korea.
"The Olympic flame", was the title of the winner cartoon, and calls the attention to the multiple violations of Human Rights of China on Tibet.
Augusto Cid collaborates weekly with the newspaper SOL and had an anthological exhibition on the Portuguese Printing Press Museum, in 2004. Called "The Knight of the cartoon" the exhibition presented about 120 of his best cartoons made throughout his career.
The "Human Rights" was the theme chosen for this PortoCartoon edition and assumes a special relevance at this time with the Olympic flame's problems on its journey to China.
As the quality of the works received was of a very high level, the PortoCartoon international jury had also given 15 honourable mentions: Seyran Caferli, Azerbaijan; Luc Vernimmen, Belgium; Cau Gomez, Brazil; Eduardo Ferreira Grosso, Brazil; Harold Ortiz Sandoval, Colombia; Myung-Lae Nam, South Korea; Alberto Morales Ajubel, Spain; António Mongiello “Napo”, France; Dave Connaughton, England; Angel Boligan, Mexico; Pawel Kuczynski, Poland; António Santos, Portugal; Ali Sur, Turkey; Musa Gumus, Turkey and Sevket Yalaz, Turkey.
The winners will receive a monetary prize and bottles of special Port Wine (special reserve) together with the trophy and diploma.
This is the first time over the ten years of this festival we registered such a geographical enlargement of the participation, 70 countries. This means a growth of 20% when comparing it with 2007. Moreover, both in terms of cartoonists and works the participation of previous years was exceed. The organization of PortoCartoon received almost 2000 drawings of more than 500 artists. Brazil is the country with more participants - more than 50 cartoonists, with 200 works. In second place was Portugal, followed by Iran.
The international jury of X PortoCartoon was presided by Marlene Pohle, president of FECO and had the following members: Xaquin Marin, director of the Museo de Humor de Fene (Spain), Julio Dolbeth, from the Faculdade de Belas Artes do Porto, Lucília José Justino, President of Amnesty International of Portugal; Naoki Seshimo, Japanese architect; Nuno Costa Santos, representative of Produções Fictícias; Raquel Almeida, representing the Ministry of Culture, and Luís Humberto Marcos, director of PortoCartoon and Museum.
The PortoCartoon is considered by FECO (Federation of Cartoonists Organisations) as one of the three most important festivals of humour in the entire world. FECO is the most important international cartoonists’ organization and represents more than 2000 artists of 30 countries.
The PortoCartoon has been annually organized since 1998, and this year celebrates its 10th anniversary, always with themes of great impact worldwide.
Several hundreds of thousands of visitors have seen the ninth editions of PortoCartoon which took place on the Portuguese Printing Press Museum, and in the several cities where exhibited, including countries as Argentina, Brazil, Spain and Mexico.
The winners of the X PortoCartoon will receive their trophies and prizes during the opening ceremony of the exhibition to be held on the Portuguese Printing Press Museum, in June, during the S. João of Porto festivities.
The other winning cartoons can been seen in the http://www.cartoonvirtualmuseum.org/i_noticias_f_i.htm