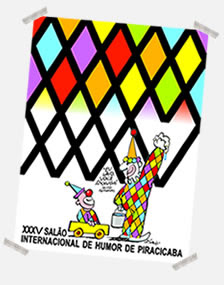 1 - DATES
The 35th Piracicaba International Humor Show will be held according to the following REGULATION AND SCHEDULE:
REGISTRATION (Extended due to post office strike): until August 11, 2008.
OPENING: August 30, 2008.
2 - ATTENDANCE
All professional or amateur cartoonists may register new humor works that have not received prizes in other shows, until up to the event subscription closing date (July 31, 2008). Each author may register up to 2 (two) works per category. Any works developed in any technique will be accepted.
3 - CATEGORIES
Cartoon, Charge, Caricature, Strips and Vanguard (in this category, computerized works may be registered).
The theme is free, in A3 (297 x 420 mm) format, without frames and cardboard-mounted. In the Strips category, boards with a maximum of 1 to 3 pages will be accepted, with humor themes.
Categories Definitions:
CARTOON – Graphic humor with universal and eternal themes.
CHARGE – Graphic representation of a current journalistic theme.
CARICATURE – Graphic art that expresses in a satiric manner the physical and/or personality character features.
STRIPS – Graphic art in sequence, with theme closed in standard format, usually published in newspaper columns.
VANGUARD – Graphic humor translated into forms that do not follow previous standards, but are presented as a cardboard presentation, in A3 (297 x 420mm) format.
Works that did not comply with these dimensions will be automatically disqualified.
4 - PRIZE
A total of 5 (five) prizes will be awarded, in a total amount of R$ 25,000.00 (twenty five thousand reais), acquisitive by Piracicaba Municipality, divided as follows:
a) Five Prizewinners, in the amount of R$ 4,000.00 (four thousand reais), divided into the following categories.
b) A R$ 5,000.00 (five thousand reais) prize denominated GRANDE PRÊMIO SALÃO DE HUMOR DE PIRACICABA [Piracicaba Humor Show Big Prize], which will be granted to one of the five prizewinners in each category.
c) The winner of the Humor Show Big Prize, will receive a special trophy, and the prizewinners of each category, whose artwork and creation will be donated by cartoonist Zélio Alves Pinto.
It will be conferred also a prize, in the value of R$ 2,851.51 (two a thousand eight hundred and fifty and one reals and fifty and cents), exclusively for the category caricature, buying value of the Chamber of Councilmen of the City of Piracicaba.
Observation: The prize jury reserves the right to not award prizes to the categories that do not reach the required levels, transferring them to other categories or creating a special prize of the Show.
There will be a Selection Jury and a Prize Jury composed of qualified people of the concerned area. The prizes will be acquisitive by Piracicaba Municipality.
If the prize jury finds any type of fraud or illegal use in one or more registered works, it may cancel the awarded prize. The awarded works will be divulged on the Humor Show’s webpage after inauguration of the same, and may be contested until one week after the Show’s opening, with the applicable evidence of any irregularities committed without the jury’s knowledge.
Other prizes and mentions may be instituted, at the discretion of the Organization Committee.
5 - REGISTRATION
Works must be sent to the following address:
SALÃO INTERNACIONAL DE HUMOR DE PIRACICABA/Secretaria da Ação Cultural - Avenida Maurice Allain, 454 CEP 123.405-123 - Piracicaba - SP. BRAZIL
Deadline: (Extended due to post office strike: http://www.brazilcartoon.com/) August 11, 2008
6 - COMPLEMENTARY INFORMATION
Information: (19) 3403-2620/2621/2622/2624
Works will be returned until 1 (one) year after closing of the event on October 12, 2008. If the artist wishes to receive his/her work before that date, he/she must request it at ‘Centro de Pesquisa de Divulgação Nacional de Humor de Piracicaba’, at the above mentioned address.
In addition to the registration form, each work page must present on the back the following information: registration category, author’s full name, artistic name, full address, phone number, e-mail, CPF and RG number and banking data. They may also send a brief curriculum vitae and a picture for registration in the Show’s database.
When registering, the author transfers the Assignment of Author’s Rights relative to his/her work(s) when awarded on an acquisitive basis, in conformity with Law 9610 of February 19, 1988 (Copyright Law) on a full, universal and definite basis, in all utilization modes and on a complimentary basis, the author’s rights, safeguarded by the said law, relating to the work(s)awarded in the Piracicaba International Humor Show, becoming an integral part of the Municipal Public Heritage for all intents and purposes, in conformity with Municipal Law 2249 of 1976, partially altered by Municipal Law 2486 of 1982, and consolidated by Municipal Law5.194 of 2002.
Application form at WEB: http://www.salaodehumordepiracicaba.com.br/