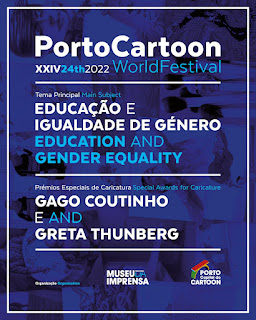 24th PortoCartoon World Festival 2022, Portugal
General Rules and Regulations
1 Main Subject EDUCATION AND GENDER EQUALITY
Quality Education and Gender Equality are the UN bets to improve the world.
With these themes, corresponding to the 4th and 5th SDGs (Sustainable Development Goals), PortoCartoon calls once again the artists to two fundamental concerns for the future of humanity.
Education continues to be a factor in the expression of inequalities, with around 260 million children unable to attend school, especially in the southern hemisphere, especially in countries in central Asia and sub-Saharan Africa. This is a drama with great implications for the future of these countries. The UN goal is to access inclusive, quality and equitable education and to promote lifelong learning opportunities for all by 2030.
In terms of Gender Equality, the situation is more serious: 2.8 billion women and girls live in countries that do little to eliminate the discrimination they face.
This will be one of the most lagging global goals, relative to the international commitment (signed by world leaders in 2015) to ‘social development’ by 2030.
Education and Gender Equality converge in dramas and need answers on a global scale.
Humor can be a good contribution. And so the challenge is given to the sharpened pencils.
2 SPECIAL AWARDS FOR CARICATURE
GRETA THUNBERG (2003- ) became known worldwide, after going on strike in front of the Swedish parliament, in 2018, in defense of the climate. She was 15 years old and, with the plaque “School Strike for Climate”, promoted a campaign that had a global effect, inspiring thousands of young people around the world. In December 2018, more than 20,000 students – from the UK to Japan – joined her, going on strike at classes to protest the lack of environmental protection measures. A year later, Greta Thunberg receives the first of three Nobel Peace Prize nominations. She faces powerful leaders, make engaging speeches, unsettle the installed power. “Everything remains the same and everything is blah blah blah,” she said at COP26 (Glasgow, Nov. 2021).
GAGO COUTINHO (1869-1959) was a Portuguese Navy officer, geographer, historian, mathematician and aviation pioneer. In 1922, he carried out the first aerial crossing of the South Atlantic, connecting Lisbon to Rio de Janeiro, together with Sacadura Cabral. With this they earned them international notoriety. In addition to several cartographic works, he developed navigation devices, such as the sextant with an artificial horizon. Known as the “precision astrolabe”, the device was internationally registered as “System Admiral Gago Coutinho”. In 2022, the centenary of this Air Crossing joins the bicentennial of Brazil’s independence. Is there another better opportunity to choose this personality?
3  Cartoonists can submit works for the MAIN THEME and for the FREE CATEGORY, as in the previous editions.
4 Artists who don’t wish to compete can send us their works EXTRA-COMPETITION, informing of their decision.
5.1. Cartoons must be original. We accept any kind of graphical techniques, including digital artwork sent by e-mail, as long as the drawings are SIGNED BY THE AUTHOR, are identified as PRINT NUMBER ONE and as an original for this contest.
5.2. Can also be presented sculptures pieces of humour, in any kind of material.
6 The artworks cannot exceed the following measurements:
- IN PAPER, 42 x 30 cm (DIN A3);
- SCULPTURE PIECES, 42 x 30 x 30 cm.
7 Cartoons should be sent with the author’s Resumé, in Portuguese or English (publications, exhibitions, prizes…) and must be identified on the reverse with the following information:
- Author’s name and address;
- Year, title and theme section.
8 Entries should arrive at the PORTUGUESE PRINTING PRESS MUSEUM until February 28th 2022 (EXTENDED:) March 07th 2022, along with the filled Entry Form.
9 The works should be sent to:
PortoCartoon-World Festival,
The Portuguese Printing Press Museum,
Estrada Nacional 108, nº 206
4300-316 PORTO, Portugal.
Or to the e-mail address: portocartoon@museudaimprensa.pt
10 The participation in PortoCartoon automatically implies that the author waives copyrights of his works in any kind of platform, concerning the production and diffusion of the festival.
11 The AWARDS, including a TROPHY and a DIPLOMA, will be the following:
Grand Prize PORTOCARTOON 4000 Euro
(half in money and half in Port wine),
travel and stay costs for the Awards Ceremony in Portugal
2nd Prize PORTOCARTOON 1200 Euro
(half in money and half in Port wine),
travel and stay costs for the Awards Ceremony in Portugal
3rd Prize PORTOCARTOON 800 Euro
(half in money and half in Port wine),
travel and stay costs for the Awards Ceremony in Portugal
Special Award for CARICATURE 1st Prize 1000 Euro
(half in money and half in Port wine)
Special Award for CARICATURE 2nd Prize 300 Euro
(half in money and half in Port wine)
Special Award for CARICATURE 3rd Prize 200 Euro
(half in money and half in Port wine)
Honorable Mentions 50 Euro and Diploma.
12 The organization does not ensure to send prizes on bottles of wine.
13 The Jury will have an odd number of members and its decisions will be final and cannot be subject to any type of appeal or complaint.
14 The awarded works will become property of the PORTUGUESE PRINTING PRESS MUSEUM and will take part of the INTERNACIONAL CARTOON GALLERY. The others will be returned to the artists, if formally requested with the entry form, after the exhibitions (during PortoCartoon and others in different cities and countries).
15 In case of using non-awarded works in other cases except PortoCartoon exhibitions or its promotion, copyright payment will be made to the artists.
16 All the artists whose works are selected for the exhibition will receive a DIGITAL CATALOGUE, that will be sent by e-mail to download. If the artist wants to receive a printed catalogue, he should request it and support the shipment costs.
17 The winning artists will receive the prizes in June 2022, in a public ceremony.
More on http://museudaimprensa.pt/ .
Also on facebook .