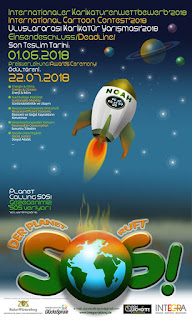 1st INTERNATIONAL “ENVIRONMENTAL ISSUES” CARTOON CONTEST 2018
Subject: Planet Calling SOS!
Long before the dawn of the ecological movement in the 1970s, there were already many committed people and groups throughout the world concerned with the relationship between mankind and nature. They were worried about the dismissive way humans were handling nature and they reasoned about the consequences of this behaviour.
What has happened since then? Topics such as climate change, global warming, soil contamination, microplastics floating in the oceans, species extinction etc. are ever-present in our media and by now, everybody should at least have heard about those issues. Unfortunately, little has changed in the behaviours, neither of the individuals nor of societies. How come?
As early as 1972, the Club of Rome, an organisation of individuals who share a common concern for the future of humanity and strive to make a difference, predicted that if there was no awakening, the existing economical system would inescapably lead to a global ecological and economical collapse. They explained that causes and effects of human activities were often set wide apart in terms of time and space. Hence many can't (or don't want to) see the impact of their behaviour and simply deny responsibility.
This can't go on any longer. Our planet is sending an “SOS”, making an emergency call. The Earth is in a critical situation and mankind is at a turning point. For instance, provided that all imaginable measures and precautions were taken, the ozone layer would still need at least 10 years to renew itself. If we are to believe recent research, the world population is expected to be 9 billion in 2050! If we fail to consume our energy and natural resources in a conscious and responsible way, sooner or later, life on our planet will become impossible.
Hence we are now calling upon all caricaturists in the world: Let’s draw our lines and warn the ones who can't see the oncoming dangers! Let’s save our planet!
Rules of the competition:
1) Joining the competition is possible only via internet ( planetcallingsos@gmail.com ) (with cv-address).
2) All submitted pieces of work should be participating in a contest for the first time. In the event of violation of this requirement, any awarded prizes shall be returned.
3) The caricatures are to be submitted in A3 size, with a resolution of 300 dpi and in Jpeg format (black and white or colour, no restriction as to technical colour processing).
4) The closing date of the competition is June 1, 2018.
5) Based upon the submitted caricatures, the jury will pre-select 100 finalists from June 01 to 15, 2018. These finalists will then be presented on social media platforms and on INTEGRA's and Don Quichotte's websites for the following 10 days.
6) The jury will evaluate the pre-selected works of art from June 25 to 30, 2018 and publish the results on July 1, 2018.
7) The award ceremony will take place in line with the exhibition opening on July 22, 2018 at the Municipal Art Gallery in Filderstadt.
8) Submitted caricatures will be securely stored within INTEGRA's and Don Quichotte's archives. For any use other than contest related, permission shall be seeked from each author prior to use.
9) A contest catalogue shall be issued in pdf format and published.
Prizes:
- First Prize: 1.500 Euro +Don Quichotte Medal
- Second Prize: 1.000 Euro +Don Quichotte Medal
- Third Prize: 500 Euro +Don Quichotte Medal
- Special Awards
Jury Members:
- Angel Boligan (Mexico)
- Valeri Kurtu (Germany)
- Peter Nieuwendijk (Netherlands)
- Willem Rasing (Netherlands)
- Bernard Bouton (France)
- Pavel Kuczynski (Poland)
- Trayko Popov (Bulgaria)
- Tan Oral (Turkey)
- Hayati Boyacıoğlu (Germany)
- Erdoğan Karayel (Germany)
Technical Assistant:
- Saadet Demir Yalçın (Turkey).