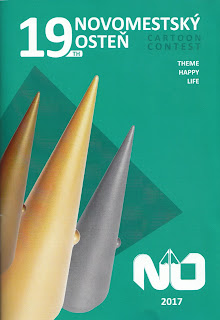 Received today the color catalog of the 19th Novomestsky Osten Cartoon Contest 2017 in the Slovak Republic. The 14.75 x 21 cm sized catalog of quality paper has 48 pages including the covers. The cartoon on the back cover is by the 1st Prize-winning artist Oleksy Kustovsky from Ukraine. Below is the complete list of winners in the contest this year with theme "Happy Life". And some scans of cartoons in the catalog are followed. 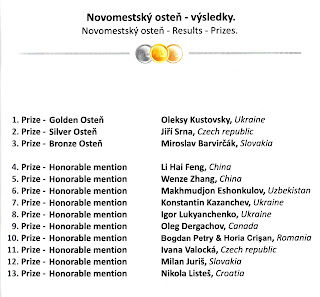 The Novomestsky Osten Cartoon Contest was first organised in 1982 as the first festival of humorous drawings in the then Czechoslovakia. "Not only did it come into existence, it took firm roots," reminds Mr Josef Trstensky, the Mayor of Nové Mesto nad Vahom, in his foreword to the catalog: "A duo of enthusiasts - former Academy of Performing Arts graduates - were later joined by other Bratislava based artists, chief among them Viktor Kubal, the nestor of the Slovak caricature.
The Novomestsky osten took firm roots, and grew to such extent that in 2013 it became an international event." At present, they "are in the process of preparing the project documentation for the new gallery (of humorous drawings and satire), and if all goes to plan, the premises should be refurbished until the end of 2018, following which the gallery will be open."
Many thanks to the organizers for sending me this precious book of humor. It includes the works by four Turkish cartoonists as well, namely Musa Gümüş, Ömer Çam, Kaan Saatçi, and Kemal Özyurt. 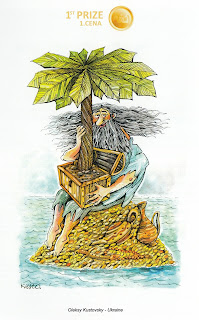 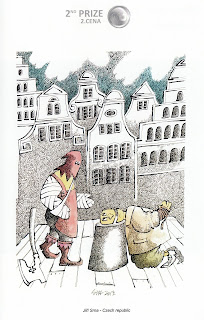 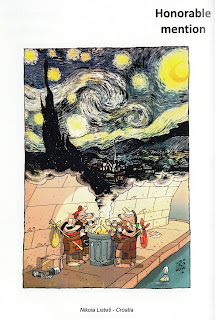 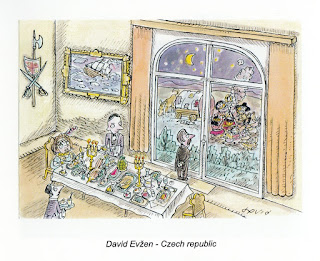 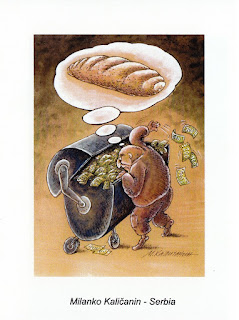