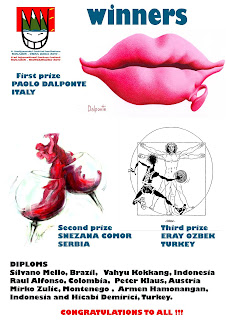 FINAL DECISION OF THE JURY
FUNNY T-SHIRTS, KOLASIN, 2017
208 artists from 46 countries around the world participated at the competition, which includes 618 works.
Once preselection being made, we chose 102 best authors with 306 works. The jury started selecting the best 60 works. Works were viewed via a video projector. The best 60 works were printed on A3 format after which the final selection of the top 20 works was made. The works that received four votes from the jury declared the winner. Out of the top ten, the jury selected by secret voting the top three: first, second and third prize. Seven authors have won diplomas.
The FIRST PRIZE, which consists of a trophy, a T-shirt with his work and 300 euros, won: PAOLO DALPONTE, Italia
SECOND PRIZE: A diploma, a T-shirt and the amount of 200 euros, won: SNEZANA ČOMOR, Serbia
THIRD PRIZE: A diploma, a T-shirt and 100 euros, won: ERAY OZBEK, Turkey.
Those who won diplomas are following: Silvano Mello, Brazil; Vahyu Kokkang, Indonesia; Raul Alfonso, Colombia; Peter Klaus, Austria; Mirko Zulic, Montenego; Armen Hamonangan, Indonesia; and Hicabi Demirci, Turkey.
Opening ceremony and exhibition of the best works will be held on July 1st, 2017, in the premise of the culture centre in Kolasin. The festival shall be open by His Excellency, Ambassador of Norway, Arne Bjornstad Sanes, June, 18, 2017, in Kolasin. 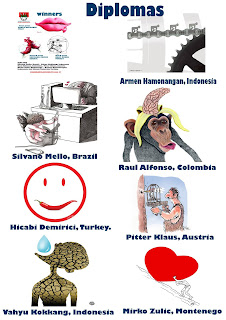