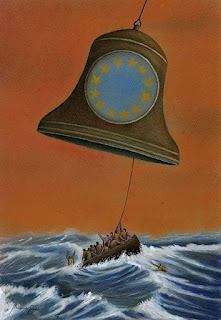 Iranian artist wins PortoCartoon
Mahboobeh Pakdel, from Iran, with the works "Emigration" (Top), won the Grand Prize of the 18th PortoCartoon - "The global understanding", organized by the Portuguese Printing Press Museum.
The Second Prize was awarded to Muhittin Koroglu, from Turkey.
The Third Prize ex-aequo was awarded to Plantu (France), with the work entitled "Long live Utopia!", and to Mihai Ignat (Romania). The works of Plantu, cartoonist of the front page of Le Monde, has all the text in Portuguese. Koroglu and Ignat had already won the PortoCartoon Grand Prize in 2003 (theme: Water) and 2009 (theme: Crisis), respectively.
This year's edition included two special awards caricature, in tribute to the immortal figure of the cinema, Charlie Chaplin and international model Sara Sampaio. The winners were, respectively, Cau Gomez (Brazil) and Marzio L. Mariani, of (Italy).
The high quality of the works led the international jury to award 12 Honorable Mentions to artists from different countries such as: Brazil, Spain, Iran (2), Israel, Italy, Mexico (2), Portugal, Russia, Turkey and Ukraine.
In appreciation were about 1800 works of nearly 500 artists coming from 60 countries from all continents.
Iran is the country with the largest participation: more than two hundred works of 60 cartoonists, followed by Romania, Brazil, Turkey, Portugal, China, Serbia and Ukraine.
With this 18th edition, PortoCartoon strengthens its place on the international podium of competitions of humor drawing and shows the relevance of Porto as the “capital of the cartoon”, since 2008.
The International Jury of the 18th PortoCartoon had as Honorary President Georges Wolinski, Charlie Hebdo’s cartoonist murdered in January 2015 in Paris, who had been President to the Jury for a decade. The members of the Jury of PortoCartoon 2016 were: Bernard Bouton (president of FECO), Luís Humberto Marcos (Director of the Portuguese Printing Press Museum), Luís Mendonça (representative of the Faculty of Fine Arts of Porto), Roberto Merino (stage director) and Xaquin Marin (founder of Fene Humor Museum, Spain).
The winners of the 18th PortoCartoon will receive trophies (designed by Siza Vieira) and their prizes during the exhibition opening ceremony to be held in the Portuguese Printing Press Museum, in June.
The importance of the main theme of PortoCartoon 2016 in line with the UNESCO designation for 2016 as the Year of the Global Understanding, and the high quality of work was underlined by the members of the Jury, at the press conference held at the Portuguese Printing Press Museum.
04/April/2016.
Source: cartoonvirtualmuseum.