The 15th International Editorial Cartoon Competition of the CCWPF 2015 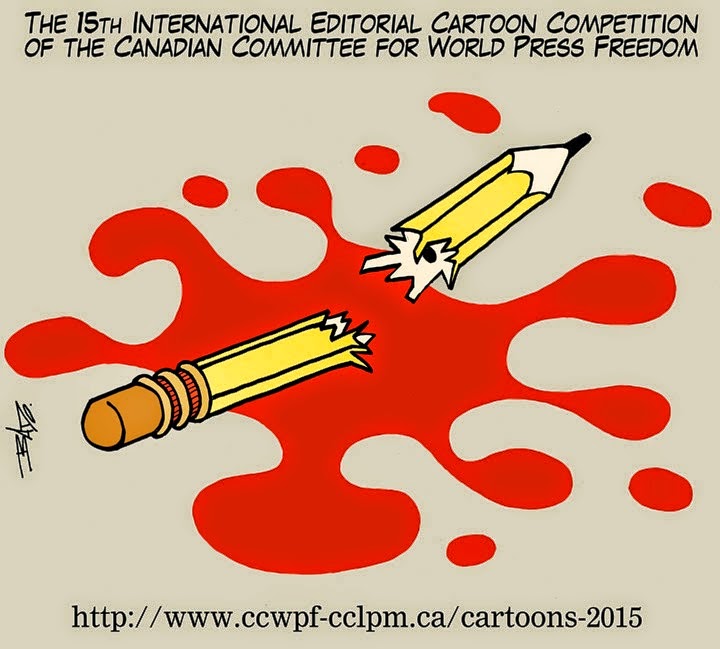 The 15th International Editorial Cartoon Competition of the Canadian Committee for World Press Freedom 2015
1. The theme for the 15th International Editorial Cartoon Competition is:
The price of freedom
Last year was difficult for cartoonists worldwide.
In Venezuela, Rayma Subrani was fired from the newspaper "El Universal" for linking former President Chavez to the problems of the health system.
Turkish cartoonist Mehmet Düzenli was jailed for "insulting" Adnan Oktar, a controversial Muslim preacher.
France experienced the worst terrorist attack in it’s soil when five "Charlie Hebdo" cartooonists were murdered in the office of the satirical magazine.
Freedom of the press has a value but it also has a price.
2. Prizes: three prizes will be given: a first prize of $1500 plus a Certificate from the Canadian Commission for UNESCO, a second prize of $750 and a third of $500. All sums are in Canadian dollars. Ten additional cartoons will receive an ‘Award of Excellence,’ Regrettably no financial remuneration accompanies the Awards of Excellence.
3. Only one cartoon will be accepted from each cartoonist. It may be either in color or black and white and must not have won an award.
4. The size of the cartoon should not exceed A4; 21 by 29.2 cm; or 8.50 by 11 inches.
5. The name, address, telephone number and a short biography of the cartoonist must be included in the submission.
6. The Canadian Committee for World Press Freedom shall have the rights to use any of the cartoons entered in the Competition for promotion of our Editorial Cartoon Competition and World Press Freedom Day.
7. The winners of the Cartoon Competition will be announced at the World Press Freedom Day Luncheon held at the Chateau Laurier in Ottawa, Canada on Friday April 30, 2015 as well as being advised by e-mail. The winner’s names and their cartoons will be posted on the CCWFP web site: http://www.ccwpf-cclpm.ca/.
8. The winning cartoons will be exhibited at the luncheon.
The deadline for receipt of cartoons is 5 p.m. GMT, Friday April 3, 2015.
Send submissions by e-mail to : info@ccwpf-cclpm.ca
Cartoons should be in jpeg format at 300 dpi.
Source: bado-badosblog.