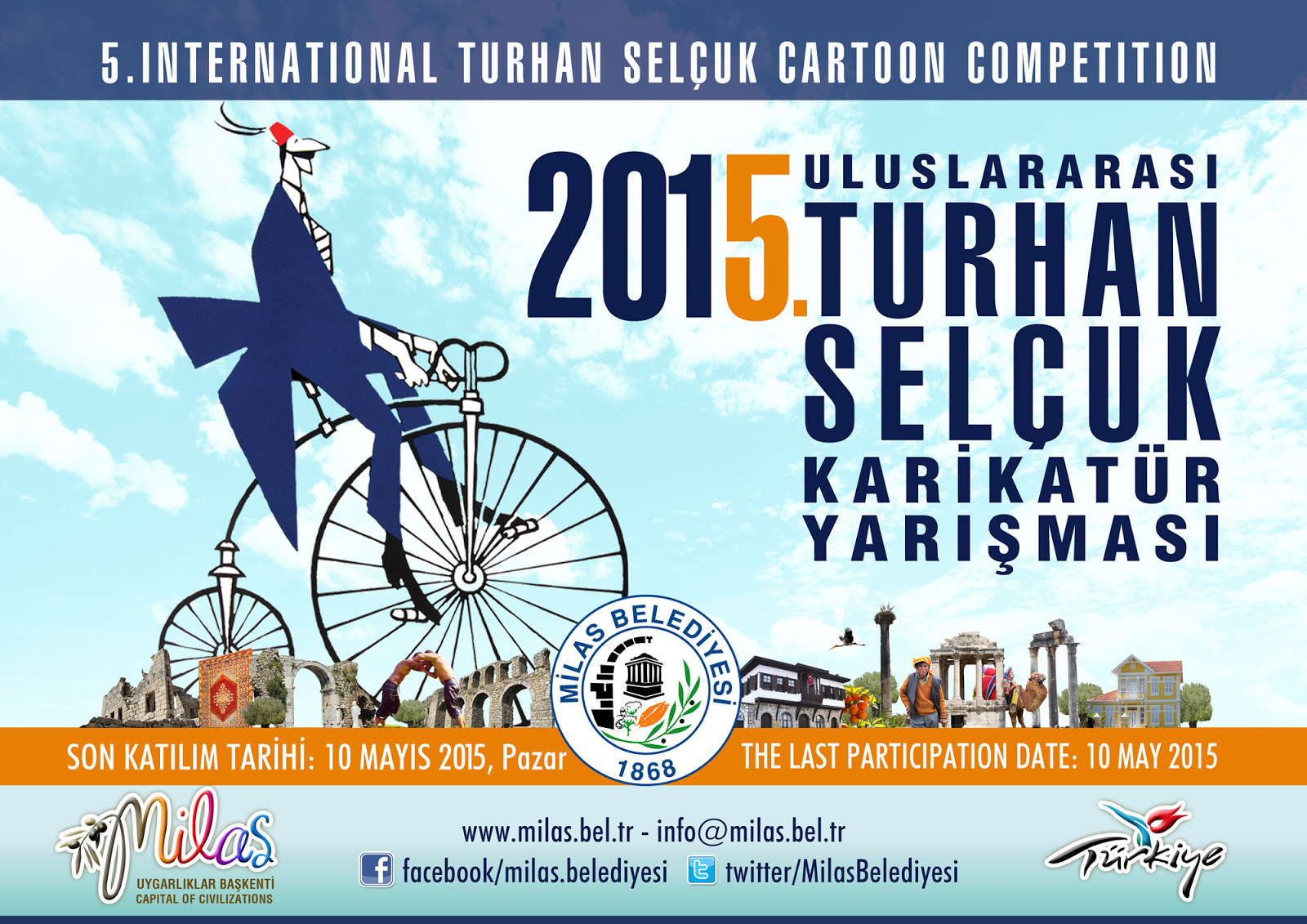 5th International Turhan Selcuk Cartoon Competition 2015
CONDITIONS
THEME: Open
CONDITIONS:
1. The competition is open to any cartoonist.
2. It is acceptable to enter with cartoons that have been published previously. However, they should not have won any prize/award in any other competition.
3. Any technique is allowed. The cartoonist can submit a maximum of 5 cartoons.
However, the cartoons must be original. As long as the cartoons have the original signature of the cartoonist, digital prints are acceptable.
4. All cartoons must be 30x40 cm maximum.
5. The participants must write their names (first and surname) in capital letters, address, e-mail, country and telephone number; a brief CV should be submitted in a sealed envelope.
6. The cartoons must be sent to the following address, no later than 10th May 2015:
5. ULUSLARARASI TURHAN SELCUK KARIKATUR YARISMASI
Milas Belediyesi Kultur Sanat Birimi
48200 - Milas - Mugla / Turkey
7. The results of the competition will be announced on 27th May 2015.
8. The cartoons sent to the competition will not be returned. All cartoons, whether they have won a prize or not, may be used for cultural purposes and may be published. Participation assumes acceptance of these conditions. All cartoons will be kept in the ‘Turhan Selcuk Karikaturlu Ev’.
9. All cartoonists whose cartoons are selected for the exhibition and the album will receive a copy of the competition album.
10. The reward ceremony will be held on 19th September 2015. The opening of the exhibition will be held on the same date, in ‘Turhan Selcuk Karikaturlu Ev’ for cartoons which have won an award or have been selected for display. The exhibition will be open until 4th October 2015.
11. Accommodation and meal expenses for participants who have won a ‘Special Award’ will be met. Travel expenses will be borne by the participants.
12. SELECTION COMMITTEE:
Muhammet Tokat - Mayor of Milas
Kamil Masaraci - Cartoonist / ISTANBUL
Serpil Kar - Cartoonist / ADANA
Rasit Yakali - Cartoonist / ISTANBUL
Muhammet Sengoz - Cartoonist / IZMIT
Xia Lichuan - Cartoonist / CHINA
Christina Sampaio - Cartoonist / PORTUGAL
13. PRIZES:
Winner: $3000.00
Runner up: $2000.00
3rd: $1000.00.
Other Special Prizes will be awarded by various establishments, societies, newspapers, art magazines, trade unions, news agents and individuals.
Note: The jury meeting will be held on the 16th May 2015.
(Updated on 26 May 2015).