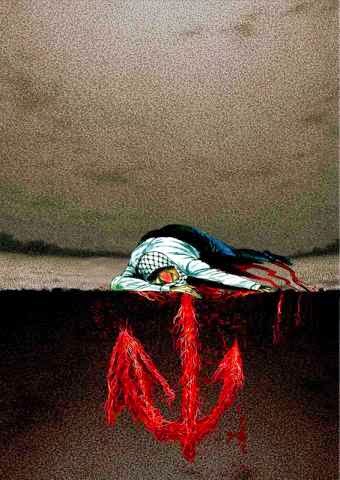 PALESTINE FOUNDATION WITHHOLDS NAJI AL-ALI AWARD DUE TO WINNER'S NATIONALITY
The International Palestine Foundation, headed by Dr. Asaad Abdulrahman, announced the Palestinian Cultural Awards in all categories except for Naji Al-Ali Award in caricature, which has been withheld due to the objection by the donor that the winner is Arab!
The terms of the award, which was announced earlier this year, stated that it is open to all who love Palestine from all over the world, and it has been announced this year through the Arab Cartoon House website which contributed for the first time in attracting the works through its Website, and collected the participating works, and organized a committee to sort the works, in addition to their participation in the jury, which consisted of caricature artists: Amjad Rasmy, Nasser Al-Jaafari and Nedal Hashim.
In this year's cycle, 111 cartoonists from 22 countries around the world have participated with 394 cartoons.
The jury selected the work of the Iranian cartoonist Bahman Jalali Nokandehi as the first place winner in addition to the work of the Bulgarian cartoonist Valentin Ivanov Georgiev in the second place, where the Committee proposed to grant the award equally between the two cartoonists. However, the award management asked the jury to change the results and not to grant the award to the Arab cartoonist because of the objection by the award donor on winner's Arabian nationality, but the jury headed by the cartoonist Amjad Rasmy refused to change the results and asked to grant the award to the winning cartoonist, provided that the terms shall be changed in the next year to limit the participations to the Arab cartoonists if the organizing committee and the donors do not want non-Arab winners.
However, the intransigence by the donor of the award valued at USD 5.000 led the organizing committee to cancel the caricature award for this year without clarifying the reasons nor mentioning the caricature category in its press release, as if it does not exist at all.
Dr. Asaad Abdulrahman pointed to the total number of participations, which reached more than 400 participants in all categories of the award, without mentioning that more than 100 participations by Palestine lovers have been omitted with no explanation or apology.
The Arab Cartoon House website, which contributed to the promotion of the award and raising the number of participations compared to about 30 participants in last year, apologizes to all the participants, cartoonists and all Palestine lovers who participated in the contest for this unjustified behavior, and considers itself irresponsible for monopolizing the award by the capitalism, and announces its apologies to all the participants for this misunderstanding of the culture in general, and its role in supporting the Palestinian issue and the resistance culture in particular, and announces the launching of opportunity to donate to collect the award value and send it the winning cartoonist.
It is worth mentioning that it the awards ceremony, which was scheduled on Saturday, September 20, 2014 at the Royal Cultural Center in Amman, Jordan, was canceled because of the chaos caused by the massive attendants in the awards ceremony, which included a special part for the poet Murid Al Barghouthi and led a large number of attendants to attack the halls, jump over the fences and spread chaos upon the place was filled with the fans of the poet.
Award management denounced this misunderstanding of the culture without being able to review its attitude to the award which held a Palestinian cartoonist's name who was always fighting against the control of capitalism over culture and the Palestinian resistance.
Author: Nedal Hahem
More on source: arabcartoon.