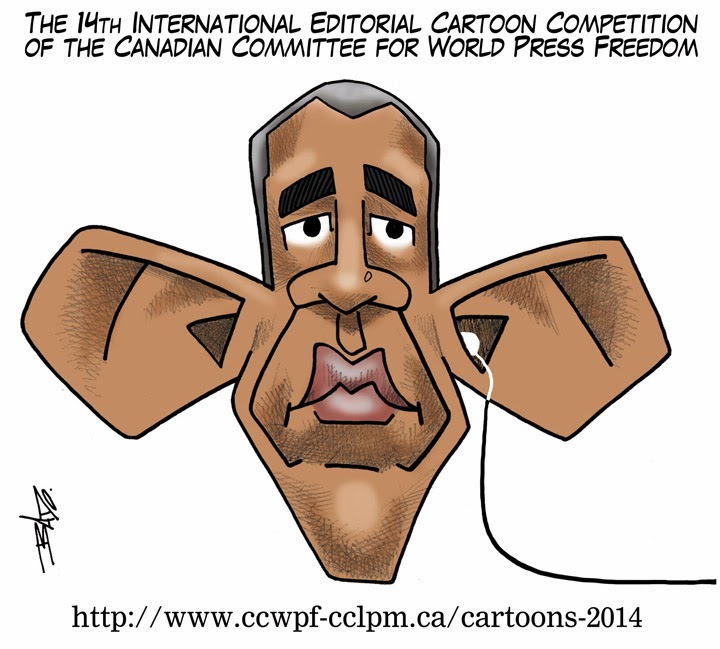 The Canadian Committee for World Press Freedom 14th International Editorial Cartoon Competition
1. The theme for the 14th International Editorial Cartoon Competition is: Big Brother is watching you
Whistleblower Edward Snowden revealed how the National Security Agency worked with government agencies to spy on the private communications of millions of individuals. Further revelations disclosed how the U.S. agency used massive data collected by internet and telephone corporations to circumvent laws that prohibit government agencies from spying on their own citizens. Without protection from illegal and unwarranted surveillance, the private communications of individuals can be chilled, leading to massive self censorship, the shackling of free speech and the creation of a Big Brother society.
2. Prizes: three prizes will be given: a first prize of $1500 plus a Certificate from Canadian UNESCO, a second prize of $750 and a third of $500. All sums are in Canadian dollars. Ten additional cartoons will receive an ‘Award of Excellence,’ Regrettably no financial remuneration accompanies the Awards of Excellence.
3. Only one cartoon will be accepted from each cartoonist. It may be either in color or black and white and must not have won an award.
4. The size of the cartoon should not exceed A4; 21 by 29.2 cm; or 8.50 by 11 inches.
5. The name, address, telephone number and a short biography of the cartoonist must be included in the submission.
6. The Canadian Committee for World Press Freedom shall have the rights to use any of the cartoons entered in the Competition for promotion of our Editorial Cartoon Competition and World Press Freedom Day.
7. The winners of the Cartoon Competition will be announced at the World Press Freedom Day Luncheon held at the National Arts Centre in Ottawa, Canada on Friday May 2, 2014 as well as being advised by e-mail. The winner’s names and their cartoons will be posted on the CCWFP web site: http://www.ccwpf-cclpm.ca/
8. The winning cartoons will be exhibited at the luncheon.
The deadline for receipt of cartoons is 5 p.m. GMT, Friday, April 4, 2014.
Send submissions by e-mail to : info@ccwpf-cclpm.ca
Cartoons should be in jpeg format at 300 dpi.