Abidin Dino in the Centenary Year of His Birth: Call to Portraits Exhibition in Turkey 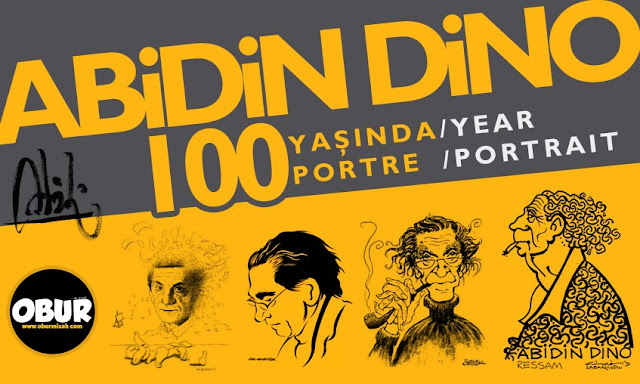 The exhibition containing the DINO portraits made by 56 cartoonists, painters and sculptors was prepared in Istanbul and Ankara by "Obur Mizah" in 2008 for the remembrance of 95th birthday of Abidin Dino. Our aim now is to prepare another exhibition, after 5 years from then, to remember him as he deserves, during his 100th birthday with additional artists to reach 100 to increase it to 100 portraits. We will be pleased with the participation of all artists to share our feelings for this aspect.
CONDITIONS OF PARTICIPATION :
• Theme : PORTRAIT of Pioneer artist Abidin Dino
• Exhibition is open for all artists. All the works done by any kind of technic - cartoon, painting, drawing etc.- are accepted. Each artist can participate the exhibition with one work only.
• The participation will be by e-mail to be sent to the address oburgaleri@gmail.com together with the info regarding name, surname, city and country of the artist.
• Works will be at least A4 ( 21x29,7 cm.) size to be scanned at 300 dpi resolution.
• Of the participating works, best 10 of them will be awarded Diplomas by the exhibition jury
Exhibition jury consists of:
Tan Oral (Cartoonist - Taraf newspaper)
Eray Özbek (Cartoonist)
Nezih Danyal (Founder and the president of The Cartoon Foundation- Cartoonist)
Kamil Masaracı (Cartoonist - Cumhuriyet newspaper)
Erdoğan Karayel (DQ Humor Magazine- Executive Editor)
Halil İ.Yıldırım (Cartoonist)
Emre Yılmaz (Obur Mizah Cartoon Magazine- Editor in chief / Cartoonist).
• The exhibition is limited to a total of 100 works.
• The participants are asked to send their works latest Sept 15th. 2013 (EXTENDED: 01 OCTOBER 2013)
• The exhibition will be opened in Istanbul on Dec 7th. 2013.
• "Obur Mizah" will be authorised to use the works in books, posters, brochures, also in promotional and media announcements related to "the exhibition" only.
The exhibition prepared in 2008 can be viewed at the link : http://www.oburmizah.com/oburmizah/abidin.html
ABIDIN DINO (1913-1993)
He was born in Istanbul in 1913. His interest in art had started by reading cartoon books. Two of his four brothers, Arif and Ali, was doing paintings and cartoons. He spent major part of his childhood in Switzerland and France. After returning back to Istanbul, as a result of his passion for art he quit his education in intermediate school and took his first steps towards the world of art. When he was only 18, his drawings were published in the "Artist" magazine and he pictured the book "The city that lost its voice" written by Nazım Hikmet. When only 20 years old, he established with 5 of his friends the "D group" which originated a revolution in the understanding of art in Turkey. Later, he spent 3 years in Russia where he went to work in the film studio of Sergey Yutgevich. After Russia, he traveled to Paris and met Picasso through a friend. Picasso, in order to support Dino, enabled him to work in his ceramic workshop; thus the friendship of two lasted long years. Dino returned to Turkey and married to Güzin Dino in 1943. Not being able to stand the oppression of the regime, he first moved to Rome and later went to Paris where he was going to live until his death. He made friendship in Paris with the world known artists like Picasso, Chagall, Aragon, Tzara and Topor. He prepared exhibitions in many important cities and art centers of the world. During his artsitic life, he accomplished countless works in painting, cartooning, drawing, book picturing, ceramic and sculpture. He passed away as a world known artist in Paris at the age of 80 in 1993.
Translation: Recep BAYRAMOĞLU.