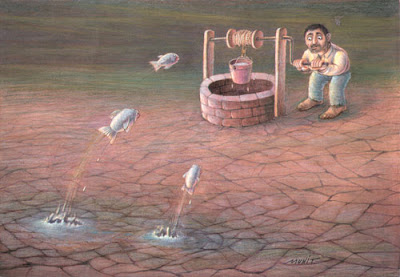 About similarities between Shibu's prize-winning 2007 and Borta's 2005 cartoons, Julian PENA - PAI reminds Muhittin Koroglu's grand prize cartoon 2003 (see above): http://www.cartoonvirtualmuseum.org/imagens/orisodomundo/2003/vpc01.jpg
Well, the problem seems to have two aspects:
A) A jury should be more careful about similarities and repetitions. Especially, if there is a pre-selection jury, the runners-up (finalists) should consist of such original works that they wouldn't lead to any controversy.
B) What is the mechanism of humoristic creation that causes the same ideas occur to artists from diverse parts of the world? Huseyin Cakmak has collected a great number of cartoons closely similar to each other yet made by artists from different countries and at different times. They don't necessarily be thought always as plagiarism I suppose. There are hidden or intrinsic patterns of humoristic thinking. Umit Mufit Dincay has once told me that he has thousands of sketches or drafts which he would develop any one into a cartoon in a short time. Muhittin Koroglu also has sets of unpublished cartoons on specific themes like Noah of the Ark, etc. What makes a cartoonist think of so many variations of a theme is deep concentration on a subject I think. Yet a cartoon is something more than an idea, isn't it? The perspective, figures, style, technique, colour, and the MESSAGE is also important. Shouldn't there be some criticism too?